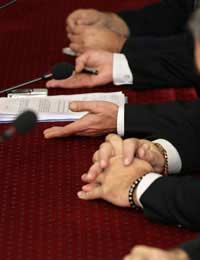 Mental Health Tribunals are judicial bodies that are independent of government. Their function is to determine the cases of mental health patients who have been detained under the Mental Health Act and decide whether or not they should be discharged from hospital. Mental Health Tribunals are normally heard in private, and therefore there are no members of the press or media at the hearings. They usually take place either in the hospital where the patient is detained, or community unit, if applicable.

A mental health tribunal will hear cases in which:

What Does The Tribunal Do?

The MHA Tribunal’s role is to decide whether or not to discharge a patient detained under the Mental Health Act. They may order the discharge immediately or after a short period of further detention. Other powers include the ability to recommend leave of absence, supervised community treatment, or for the patient to be transferred to another hospital. Although the tribunal’s powers are called ‘recommendations’ they have the ability to reconvene and reconsider a patient’s case if there is a failure to comply with the recommendations the tribunal makes.

Who Makes Up The Tribunal?

The tribunal is made up of three members. One of these people is a judge, who chairs the proceedings. One of the other two members is a medical specialist. The patient is also present at the hearing, as is their hospital doctor, a social worker, and the patient’s legal representative, if they have one. If the patient or their lawyer has provided details of the patient’s next of kin, they are also invited to attend. Patients are normally expected to attend their own hearings. If they do not, the tribunal will expect to be told reasons for this. Patients must decide not to attend of their own free will, but if they do not attend the case may proceed without them.

It is possible to appeal against the decision of a mental health tribunal if certain criteria are satisfied. These are contained within Part 5 of the Tribunals Courts and Enforcement Act 2007.