Home > In Trouble > Pleading Guilty and the Courts 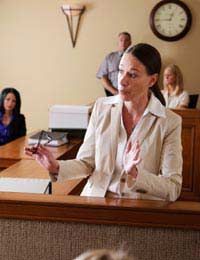 If you are thinking about pleading guilty to an offence, you may wish to seek the advice of a solicitor first. It could be that you should be pleading guilty to a lesser offence, or that you need to have the likely implications (i.e. the sentence) spelled out to you first. A solicitor may also help you to put across your side of the story, which could also have an impact on the likely punishment that the court gives you.

In most cases, if you plead guilty to an offence you will get a lesser sentence than if you are found guilty after a trial. Depending on the stage that your case has reached when you enter your guilty plea, you can get a discount of up to one third off your sentence. This applies to fines, community orders and sentences of imprisonment.

In some cases, if the facts of the prosecution case differ substantially from your version of events the judge may order a ‘Newton’ hearing. This is in effect a trial that determines the facts even though you have pleaded guilty on a limited basis. For example, if you agree that you committed section 20 GBH (wounding) but not that you did it with intent (which is section 18 GBH) then the judge may decide that you need to have a trial to determine whether or not you had the requisite intent to satisfy the elements of a section 18 offence. Most lawyers will advise against Newton hearings as it is difficult to obtain a good outcome.

You may instead be advised by your lawyer to plead guilty ‘on a basis.’ This is a document that sets out the facts that you are prepared to agree to, and is signed by you and your lawyer. If the prosecution agrees to it, then the prosecutor will also sign it. If not, you can still submit a basis of plea and give it to the judge but it will not have as much weight if the prosecution refuses to sign it.

Once you plead guilty, you are ‘convicted.’ This means that you may be put on ‘judge’s remand’ pending your sentencing hearing. This is different to being on normal ‘remand’. A remand prisoner is an un-convicted prisoner. A prisoner on judge’s remand has pleaded guilty but has not been sentenced yet.

There are lots of different types of sentences that the court can give you, from an ‘absolute discharge’ which means no punishment at all, to a life sentence. There are also conditional discharges, fines, community orders, curfews, intermittent custody and imprisonment, to name a few. You may also be ‘bound over’ to keep the peace, or if you admit guilt in the police station you could be given a caution, which will stay on your criminal record but will mean that you do not need to go to court.

If you are in any doubt about whether you should plead guilty or not, you should seek legal advice. You may be entitled to legal aid to pay for your representation, but this will depend on your financial circumstances. Again, a solicitor is the best person to advise you on this.