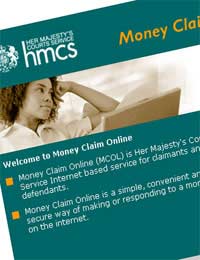 Becoming a claimant in the small claims process means you must follow a number of rules to ensure your claim is dealt with legally. Before you start your claim through the court in your area it’s a good idea to read leaflet EX301: Making a Claim? Some Questions to Ask Yourself that is available at your local court building or available to download from the HMCS website.

When and How Should I Start My Claim?

Beginning the small claims process is called issuing a claim. You can obtain all the forms you need from any court, but it is now more efficient to make your claim online using the Money Claim website. You have two choices when you begin your claim. You can start a claim in the High Court, or the Royal Courts of Justice in London. The High Court is usually attached to your local County Court where most small claims are processed.

There are limits on the types of small claims that can be heard at certain courts. You can only use the High Court for instance if your claim is for more than £15,000 or for personal injury up to £50,000. Consult your lawyer before deciding which court would best suit your claim.

The court will give you a set of forms that you must complete. When you have done this, photocopy your form and ensure you:

If at anytime you need help the small claims form it has accompanying notes to guide you. If you’re still having problems you can get free advice from the Community Legal Advice website or by calling them on 0845 345 4 345.

The Particulars of Your Claim

The most important part of your small claims form is the ‘particulars of claim’. This is where you give details about the claim you are making. You can also use this section of your form to give details of any interest you want to claim from the defendant.

The small claims process isn’t free. You will see on your claim forms how much you will have to pay to the court to handle your claim. In certain circumstances you can avoid paying these fees.

If you are on Income Support or receive Child Tax Credit for instance could mean your claim would be free. Check with the court if you are not sure. Do this as early as you can because your fee will become payable when you submit your forms to the court for processing. More information is in leaflet EX106A: Court Fees - Do I have to Pay Them? available for download from the HMCS website.

The defendant doesn’t respond to my claim

The person you are claiming against will be sent your form and a pack of additional forms with which to respond. If your forms are returned the court will send you form N216 (Notice of returned document). Even though the defendant hasn’t responded to your claim, the small claims process will continue anyway as this is required by law to ensure justice to all claimants.

What if the defendant disputes my claim?

This can happen and the defendant will have been sent a form to use in their response pack if they feel your claim isn’t fair. They can dispute all or just part of your claim. If the defendant does dispute your claim be aware that you may have to pay additional costs. These could be for witnesses to appear in court on your behalf, or to have specialised reports completed to help support your claim.

Do I need a solicitor to help with my claim?

Unless your small claim is over £5,000 and is for damages or compensation you will usually not need a solicitor. Remember though, that even with a claim for under £5,000 or that isn’t for compensation or damages could mean you need a solicitor if the particulars of your claim are complex. You would have to meet the costs of this legal advice. Remember that you can save significant amounts of money and time for claims under £100,000 that involve no more than two defendants by using the online claim system Money Claim.