Information about the Magistrates court 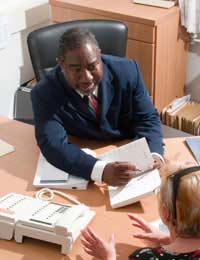 Most of the criminal court cases that are heard in England and Wales take place in a Magistrates Court. A Magistrates' Court is usually presided over by three magistrates. They are called Justices of the Peace. The panel of judges is often called the Bench. Magistrates are not paid, but they can claim for expenses and loss of earnings. There are roughly 30,000 magistrates currently working in England and Wales. You can locate your local Magistrates' Court on the HMCS website: www.hmcourts-service.gov.uk/HMCSCourtFinder.

In addition to the ordinary magistrate, England and Wales also have 130 District Judges. They have more formal legal qualifications than a magistrate. They usually sit alone and handle more complex and serious offences such as fraud. In a Magistrates' Court sentences of more than 6 months cannot normally be handed down, or fines over £5,000. If the offender's crime is more serious and requires a higher fine or a longer sentence, the Magistrate's Court will refer the case to the Crown Court.

Cases at the Magistrates' Court

Most of the cases that come before a Magistrates' Court will be bought by the Crown Prosecution Services (CPS). However, some government departments such as HM Revenue and Customs and the Health and Safety Executive may bring their own cases. The CPS will also have a representative in court to prosecute their case.

Defendants who come before a Magistrates' Court will either be in police custody, are on bail, or have been summoned to court (if they haven't paid their council tax for instance). For defendants there is a duty solicitor if they have not brought their own to court. Often with minor cases such as motoring offences the defendant will represent themselves.

When the court is in session the defendant who is before the magistrate for a summary offence (that is a petty crime that doesn't need a jury to decide on guilt or innocence) will be asked to make a plea. If this is not guilty a date will be set for the trial. If the charge is an either way offence (in that the cases could be heard equally at a Magistrates' or Crown Court) the Magistrate will decide how to proceed after arguments by the prosecution and defence have been heard. If the offence is indictable (that have the right of trial by jury) the case will be sent straight to the Crown Court. If the plea is guilty the Magistrate will consider sentence, but if the crime is serious they may refer the case to the Crown Court that can impose higher sentences than the Magistrate is allowed.

There are a number of criminal cases that can go before a Magistrates' Court. They are divided into three categories and include:

A Magistrates' Court has a number of civil duties that it carries out. These include:

Magistrates' Courts also issue warrants that have been requested by their local police force and also handle cases in the Youth Court when offenders are aged between 10 and 17. The magistrates that preside over youth courts have specialised training in dealing with young offenders. Magistrates' in a youth court can impose a custodial sentence known as a DTO or Detention and Training Order that can last up to two years.

Depending on the type of offence, summary crimes in Scotland are heard by the Sheriff Court or the District Court. As in England and Wales, one or more Justices of the Peace will judge offenders in these courts. Offences heard in District Courts are of two types. The solemn procedure hearing takes place before a judge and 15 jury members. In these cases, the offender can be found guilty, not guilty or not proven. The summary procedure is a case where the judge sits without a jury.

Northern Ireland has its own magistrates' court system. County Courts are similar to the Magistrates' Courts in England and Wales. They deal with petty crimes and also offences linked to young people and family disputes.