Home > Different Courtrooms > What Happens at the Coroner's Court?

What Happens at the Coroner's Court? 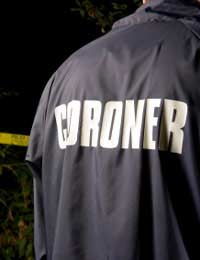 A coroner is a specially trained doctor or lawyer who in certain circumstances investigates the cause of someone’s death. The coroner becomes involved after a death in the following circumstances: if the death was violent, in suspicious circumstances, in prison or police custody, was caused by an industrial disease, while a patient was having an operation, or if the deceased was not previously ill or had not seen a doctor within 14 days before the death, or the cause of death is unknown or uncertain.

In such situations, a post-mortem operation is usually necessary to establish the cause of death. One of the deceased’s doctors can ask relatives for this permission. Alternatively permission is not required for the coroner to order this to take place, although the family’s interests can be represented by a doctor at the post-mortem. If the post-mortem examination does not reveal the cause of death, or in certain other circumstances (industrial disease, violent or unnatural death, or death in prison) there will be an inquest.

An inquest is a hearing that determines the cause of someone’s death. This hearing is held in public. Whether or not there is a jury will depend on the interests of the relatives and whether a jury is ‘in the public interest’. Generally, an inquest will be heard by a jury if the death occurred at work, in police custody or prison or if there is a risk that further deaths could occur in similar circumstances to the death in issue. It is important to note that an inquest is not a trial. An inquest establishes the identity of the deceased; how, where and when the death occurred but not who (if anyone) was responsible for it. Blame for the death is determined at a trial in the applicable civil or criminal court, not at the inquest.

The coroner has to inform certain people about the inquest: the next of kin, whether a husband, wife, civil partner or other person, and (if applicable) the personal representative.

Court Proceedings and the Inquest

If there is likely to be a claim for compensation (e.g. death after an accident at work or on the road) it is important that the relatives are legally represented at the inquest. If there are criminal charges to be heard in relation to the death, the inquest should normally be determined prior to the court proceedings. The criminal proceedings may be in the Magistrates’ Court (for example, in relation to a charge for careless driving) or in the Crown Court (for example, for a charge of murder or manslaughter) or be subject to an appeal in one of the higher courts. The inquest is not dependent on the outcome of civil proceedings, although evidence given at the inquest or in criminal proceedings may be of assistance in subsequent civil claims for compensation.

In order to determine the circumstances surrounding a person’s death the coroner may require witnesses to be called to give their account at the inquest. These witnesses must attend, and can face penalties for not attending.

The verdicts that a coroner can return are:

Is There a Right to Appeal?

If you disagree with the outcome of the inquest, there are certain circumstances in which you can challenge the coroner’s decision or verdict. An application for judicial review can be made within 3 months of the inquest, but this is a specialist procedure which requires consultation with a lawyer. A fresh inquest can be held at any time.